Although the terms ‘Discipline’ and ‘Willpower’ can be argued to have subtle differences, they can in fact be used interchangeably.

Willpower, boiled down to its essence, is simply…

Having the capacity to do something you don’t want to do because you know that it’s the thing that NEEDS to be done.

In most cases this involves delaying gratification and suppressing/ ignoring our instinctual wants and desires.

Willpower as a Muscle

Whenever you hear people talk about willpower or discipline you often hear people describe it like it were another invisible muscle somewhere in your body.

This is actually a really good way to conceptualize it because willpower really does work a lot like a muscle.

Like physical muscles, everyone’s Willpower-Muscle is at a different strength level.

Some people are naturally more disciplined than others, so they have a better formed willpower-muscle. However with practice, even the flabbiest of willpower-muscle can be hardened.

Our willpower-muscle is like a physical muscle, it is affected by both training and food intake. Understanding this principle means we can work within this system to improve it.

As we strive to develop a stronger willpower-muscle it helps to view the process the same way as working out in a gym.

If you haven’t been to the gym in a while, your training has to be relative to your current fitness level. There’s no point in going to the gym for the first time in a decade and trying to do one-handed pull-ups. Why? Because (as anyone with common sense will tell you) you’ll end up getting injured. In addition, you’ll probably be deterred from working out in the future — leaving you doomed to remain as out of shape as you originally were/ become even more out of shape in the future.

It’s important to realize that despite us needing to exercise our discipline and willpower-muscle, care must be taken that we don’t expect too much, too soon.

Listed below is an easy to follow, but very powerful, 5 step program to tone and strengthen your willpower-muscle.

Like your physical muscles, your willpower-muscle has a limited amount of energy. Once that energy is fully used, your willpower isn’t going to be able to do anything until it’s had some time to rest and recover.

Since you know this is the case, don’t set yourself up for failure. If you knew you had to help your friend move house on Monday, would you run a marathon on Sunday? No, you’d be spent by the time you got to Monday and you’d be useless to your friend. So use the same common sense with your willpower.

If you know you’re going to have to turn down desserts later, don’t spend all day walking past cookies and donuts.

Eliminate the things you can; the ones that have the potential to sap away little bits of discipline.

This way, your reserves are filled for the real tests you know are coming.

STEP 2: Do Your Exercises

Find a task you should do but never want to. For example, meditation.

Now make yourself do this task for a very short amount of time each day eg. 5 minutes.

Do this every day for a week.

The following week, increase this daily amount of time spent on this task to 10 minutes.

Then the week after, increase the time spent on the task to 15 minutes, and so on.

Using this protocol, you’ll be meditating (consistently) for 30 minutes a day within 6 weeks!

Another very powerful technique you can use, is to consciously force yourself to do some little thing in a different way.

Make a commitment to not use contractions in your speech.

These small commitments to doing things differently will pull you out of your comfort zone, and will provide a solid workout for your willpower-muscle. This effort adds up quickly, making your willpower progressively powerful.

Be careful though, as just like with your physical muscles, overtraining can lead to problems. I also wouldn’t recommend training to failure. Don’t put out a giant plate of cakes to resist all day, only to push yourself too far, give up, and gorge on them.

Always be mindful of your limits and keep at it, I guarantee you’ll see improvements.

In order to build a strong foundation, it’s important to not rush the process. Conversely though, make sure that you’re consistently improving (even if just a little bit) every day.

Your willpower-muscle needs energy to function, just like your physical muscles do. It’s been shown by researchers that the more someone exercises their willpower, the more blood sugar and glycogen reserves are used.

What this means is that the more you flex your willpower-muscle, the harder it is to keep up.

This doesn’t mean you should refrain from exercising your willpower-muscle, but it does mean that you need to feed this muscle in a way that energizes it.

Studies have shown that orange juice, or sweet drinks can help mitigate the effects of prolonged use of the willpower-muscle.

Your mood also directly affects the strength of your discipline and willpower-muscle. When you’re in a good mood, your willpower is stronger. But when you’re feeling depressed, upset, or angry it’s a lot harder to resist doing things you shouldn’t or force yourself to do the things that you should.

With all that said though, I know it can be a bit tough to maintain a positive attitude consistently.

One of the best ways of getting yourself in a good mood is through music. Listening to music can give you that extra mental motivation to do what needs to be done.

So, if you ever find that you lack the motivation to sit down and get your work done, instead of wasting time on Twitter or Facebook, go put on some of your favorite music and rock-out or dance around, or whatever you need to do to get pumped. Then sit back down and get stuff done.

We all have fears and memories that haunt us. If we try to run away from these things, or suppress them, they eventually consume us.

The same thing happens to us when we try to avoid focusing on something unpleasant – or anything really. It’s like when someone tells you, “Whatever you do, don’t think about [blank].” You can’t help but think about it. The harder you try to not think about it the harder it is to actually not think about it. Researchers have been doing studies on this effect for a long time and in every case the more we focus on avoiding something, the more difficult it is not to dwell on it.

The key is to accept our fears, and to let them turn into anger.  Then to take that anger and redirect it into positive things. This effectively makes anger into rocket fuel; that can propel you to more desirable destinations.

Willpower is the ability to either stop yourself from doing something you want to do, or making yourself do something you don’t want to do. Either way it has to do with overriding your desires. A lot of people think the best way to do that is to try to fight their desires. They might for example feel an extreme craving for chocolate, and respond by metaphorically putting their hands over their ears yelling, “No. No. No. Can’t hear you!”   Unfortunately, this doesn’t work though because the more you try to deny or ignore your desires, the more irresistible they become.

The best course of action isn’t to deny your desires. It’s instead better to acknowledge them, and ACTIVELY DECIDE what to do about them. When you do that, those desires lose their power.

Rather than ignoring your desires, alternatively say, “I really want some chocolate. I shouldn’t though, so I’ll go chop up an apple and sprinkle just a little brown sugar on it. That’ll be a lot better in the long run.”

Think of it as mental jujitsu.   You’re taking a desire like maybe wanting to ditch work to play video games, and turning that into you dominating your work so that you can later play video games knowing that you’ve earned your leisure time.

What these techniques will do is to help you build-up your willpower-muscle in a progressive and steady manner. This will ensure that any progress you make will be long-lasting, and not fleeting.

Which means that you’ll end up achieving more of your goals, and who doesn’t want to do that?

So stop reading this, go do the Willpower Workout, and LIVE MORE THAN YOU EXIST. 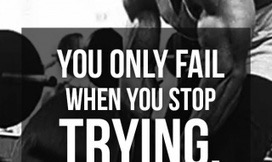 2 responses to “Your Willpower Muscle, and You”