I’ve heard a lot of talk in my life about the conscious mind vs the subconscious and unconscious mind. Countless books have been written on the subject and psychology presents and purports many theories to support and highlight the importance of different levels of thinking and processing information.

However, despite being aware of the conscious and other levels of the mind, it wasn’t until my 8 near death experiences, that I finally was taught how to view, understand and apply the knowledge and theories of these levels of consciousness in order to affect change in my life.

The first thing that I was taught in the afterlife about our current existence in our world is that, on an even shallower level than the subconscious or unconscious mind, we still live in two worlds: The Outer World, and the Inner World.

The Outer world is the world of circumstances and situations that happen to you.

The Inner world is the world of your thoughts and reactions to the outer world.

These two worlds are totally different, and totally independent from one another and yet they can affect each other greatly.

We make a big mistake in our life when we think of everything being part of one world. Most of us think that we are “ok,” that we are living life, and that it’s all one big world that we live in.

But it is important to realize that this is untrue. We are actually living simultaneously in more than one world, and on many different levels.

The two levels in the conscious world are:

The outer world — the world of circumstance and our thoughts about it.

The inner world — the world of all knowledge.

But, you’re also here in the inner world. This is because I have your attention right now and because you’re interested in what I have to say.

But, if you were to become disinterested in what I was saying, if you (in the unlikely event) found me boring and lost interest in what I had to say; you could very well remain with my article in front of you in the outer world, but in the inner world you could go to an entirely different place.

The point being that although you would physically remain here in the outer world, in your inner world you could be in an entirely different place. This is something that we actually do very frequently in our lives.

Quite often in the outer world we function on auto-pilot, while in the inner world we are actually thinking about all kinds of different things. We’ve all done this. It’s proof that there are even deeper levels of consciousness that can operate separately but simultaneously.

Maybe we are thinking about a fight or argument that we had with someone earlier, and we are projecting ahead of what’s going to happen when we see this person the next time.

And before you realize it there you are, having this totally fictitious argument with this person as if he were actually standing in front of you. And as if things are really going to happen like that anyway, right? Nevertheless there you are in your mind projecting this whole scenario. All this is happening in the inner world, while you’re still driving in the outer world.

These two worlds are independent to each other, but they also feed each other. And we need to be aware that the connection is a two way street. They have a cause and effect relationship which is strongly dependent on what we focus on. It’s not just all about what is happening around us in the outer world.

Most people have little awareness of this other world within them and put all their focus and attention on the outer world. Worse yet, they tend to believe that they have no control over what happens to them.

Your boss comes up to you and says “We are really happy with your work, and we’d like to give you a raise.” So basically something really good happens to you in the outer world, and what happens is that you react in the inner world. Your self confidence and self esteem suddenly increases. You begin feeling good about yourself and life. And you react in the inner world, to the stimulus that happens in the outer world.

Someone maybe compliments you, and says “You look great.” You feel awesome.

Someone else comes up to you a day later and says “Damn, what’s wrong with you? Are you sick? You look terrible.” You then react to that stimulus in the inner world and feel terrible about yourself.

That’s what’s going on in our life. We are living in the inner world, but in a state of reaction. We are reacting constantly to what happens in the outer world. We react to it while simultaneously feeding deeper levels of ourselves with all of those events from the outer world and our subsequent feelings about them.

If we are a $20,000 dollars a year salesperson, if that’s our reality in the outer world, then what happens is that we react to that in the inner world. We start consistently thinking things like “I’m a $20,000 a year salesperson. That’s me. It’s shitty, but that’s life.”

This thought pattern constantly feeds and forces the outer world reality into what’s happening in the inner world. We are reinforcing it all the time.

What happens is that we take things from the outer world, and we run them around in our inner world further. So we feed our inner mind with outer experiences. As a result of this, we have no power! We have no personal power whatsoever because we are constantly living in reactions to the outer world.

It’s important to recognize the difference between the inner world and the outer world. Each world has its own laws, dynamics, possibilities, and realities. These are two totally different, separate, independent worlds from each one another.

And happiness… Everyone wants to be happy. Everyone is looking for happiness, right? Well the truth is that there is no such thing as “happiness”… Not in the outer world anyhow. In the outer world, happiness simply doesn’t exist. Happiness is part of the inner world.

When things are going great they think “Awesome!” (life is awesome)

When things are going bad they think “Oh shit!” (life is in turmoil).

When you live like this, you become nothing more than a puppet to the outer world and external circumstances, and your inner feelings and interpretations of them.

You’re stuck in a web of illusion. The outer world has mesmerized you. You are hypnotized by the outer world. Whatever is happening in the outer world we take it, and run it around in the inner world.
As a result you have no power. None.

Our power truly comes the day, the hour, the minute, that we recognize that we are not limited to living in the outer world! The most powerful of realizations comes when we realize the fundamental truth that we get to think whatever thoughts we choose.

This is the starting point of recognizing what’s happening in our life. To recognize that we are living simultaneously in two worlds:

The outer world — the world of circumstances and situations.

The inner world — the world of our thoughts and reactions.

We need to understand that these are two totally different and independent worlds from one another. We need to begin to work in the inner world, on many levels, independent of what the outer world is suggesting.

Until next time, make sure to Live More Than You Exist. 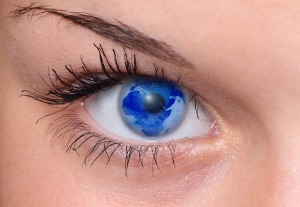 5 responses to “The World(s) We Live In”